Evolution deniers don’t like it when science textbooks tell students the truth. And creationists were really unhappy last year when they failed to pressure publishers into undermining the teaching of evolution in new biology textbooks adopted by the State Board of Education (SBOE) for Texas public schools. So now they’re making a last-ditch effort to bully publishers into falsifying the science in those textbooks.

We told you in January that the head of an East Texas organization that opposes the teaching of evolution, the absurdly misnamed Educational Research Analysts, had filed a formal complaint with the Texas Education Agency (TEA). Neal Frey’s complaint charged that Pearson Education’s high school biology textbook was wrong in explaining the close similarities between chimpanzee and human DNA. The textbook said scientific evidence shows that chimps are the closest living genetic relatives of humans. Creationists hate that. Pearson responded to Frey’s complaint by pointing out how he simply doesn’t know what in the world he’s talking about.

Well, this week the Texas Freedom Network discovered that SBOE Chairwoman Barbara Cargill backed Frey’s complaint. Of course, it’s no great surprise Cargill would support a fellow evolution denier’s efforts to dumb down a science textbook. What’s particularly troubling here is how she did it.

Writing in a January 8 email TFN obtained through a request under the state’s open records law, Cargill tried to pressure TEA staff into ruling that Frey’s claims about the Pearson textbook were actually valid. If TEA were to make such a ruling, Pearson would have to revise its textbook or face potentially hefty fines. Keep in mind that a strong majority of Cargill’s SBOE colleague’s voted to adopt the textbook last November. Did Cargill consult those colleagues before trying to pressure TEA staff to go after Pearson’s textbook less than two months later? We see no evidence that she did.

In any case, Cargill claimed in her email (click on the image below) that Frey told her publishers McGraw-Hill, Houghton Mifflin Harcourt and STEMscopes “quickly agreed to revise” their textbooks after he told them that similar passages about chimp and human DNA in their textbooks were also inaccurate. In discussing Frey’s claims about the Pearson textbook, Cargill wrote:

“Pearson has been very hard-nosed during this adoption, so I hope staff at least agrees that these 3 items must be changed, especially knowing that 3 other publishers agreed to the changes. If the science experts at McGraw, Houghton, and STEMscopes agreed with Neal, that says a lot. Neal does his homework, and I looked into it too, just to be sure. The research is solid, accurate and current.” 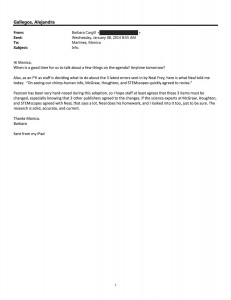 But what Cargill said doesn’t appear to be true. We have found no evidence, through open records requests as well as queries to publishers, that the publishers have made the revisions Frey was demanding. In fact, our most recent open records request to TEA also revealed that Frey is now complaining — in two June emails to the agency — that STEMscopes did NOT make the changes he demanded. So he wants TEA to fine STEMscopes as well as Pearson. Moreover, as we pointed out in January, McGraw-Hill’s biology textbook says essentially the same thing Pearson’s does: that chimps are humans’ closest living genetic relatives. So contrary to Cargill’s claims, it’s clear that the publishers’ science experts don’t agree with Frey.

But Cargill and Frey think they’ve “done their homework” and that they’re more qualified on this topic than the distinguished scientists who authored the textbooks the SBOE adopted last year. So they’ll probably continue bullying publishers in an attempt to force them to teach junk science in Texas public school textbooks. We’ll be watching this very closely.

This article was posted in these categories: Barbara Cargill, creationism, evolution, Neal Frey, Science adoption (2013), TFNEF. Bookmark the permalink. Follow comments with the RSS feed for this post.Trackbacks are closed, but you can Post a Comment.