The ideologues at the anti-evolution Discovery Institute put a lot of time and resources into pushing an agenda that would undermine the education of children across the country. Then they portray themselves and like-minded activists as somehow persecuted for doing so. They’re really shameless. Case in point: check out the editorial cartoon and quote from the Renaissance Era scientist and philosopher Galileo the Seattle-based organization tweeted on Friday: 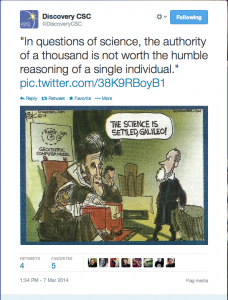 The Discovery Institute, which promotes “intelligent design”/creationism as an alternative to evolution, and other creationists insist that the overwhelming evidence supporting evolution is flawed. In fact, they argue, the evidence will one day show they’re right — if only scientists will stop persecuting them for trying to find that evidence. We heard those arguments repeatedly during the debate over new science curriculum standards and textbooks in Texas. So the Institute’s use of the out-of-context quote from Galileo is hardly a surprise. That kind of “argument” is really all they’ve got.

But the portrayal of Galileo being criticized — like, supposedly, supporters of creationism today — neglects to tell the whole story. (Imagine that.) Galileo was indeed persecuted, especially for his insistence that Earth revolves around the sun instead of the other way around. But the persecution he suffered came from the all-powerful religious authorities of his day. Those authorities rejected science and scientific evidence — just like the Discovery Institute does today.

This article was posted in these categories: creationism, Discovery Institute, evolution, intelligent design, TFNEF. Bookmark the permalink. Follow comments with the RSS feed for this post.Trackbacks are closed, but you can Post a Comment.